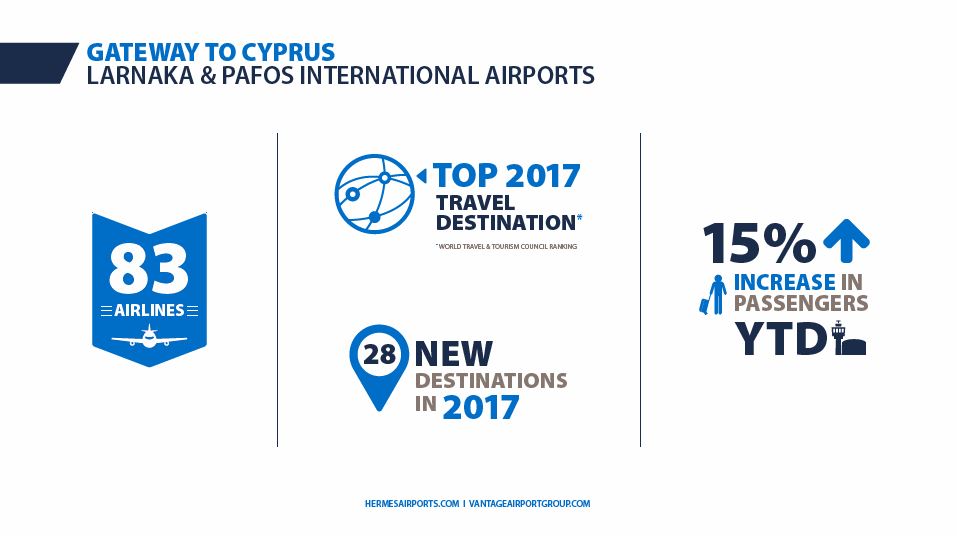 Hermes Airports’ passenger traffic has grown 15 per cent year-to-date in 2017 and 28 new destinations have been announced for the two Cypriot airports under its management, Larnaka International and Pafos International. This impressive passenger growth, which builds on last year’s 18.2 per cent increase, reaffirms that Hermes Airports’ strategy of investing in tourism development, airline incentives and stakeholder outreach is paying off.

This strategy has seen Hermes Airports – part of Vantage Airport Group’s global network – take a proactive approach to promoting Cyprus as a must-visit tourist destination to holidaymakers in Europe and the surrounding region. A notable example of this approach was Hermes Airports’ close collaboration with the Cypriot government in developing a 15-year strategy for tourism on the island.

“If we want to keep Cyprus top-of-mind as a brand and a tourism destination, the island needs to refresh its identity,” says Maria Kouroupi, senior marketing manager at Hermes Airports. “That’s why we are working closely with government, travel industry partners and airlines in particular to actively promote the creation of this new identity, which casts Cyprus as an all-seasons destination that offers visitors a compelling mix of ancient history, breathtaking geography and vibrant, modern culture.”

In order to communicate what Cyprus has to offer to travellers, Hermes Airports has initiated workshops in cities with new routes to Cyprus like Dublin, Belfast, Riga (Latvia) and Kutaisi (Georgia). These workshops allow tourism stakeholders in each of these cities to learn about the variety of travel experiences their clients can enjoy in Cyprus and gives them the opportunity to visit Cyprus and live these experiences firsthand. “The success of a new route depends a lot on the promotional efforts of the airline, but also on the collective effort of the rest of the stakeholders,” notes Kouroupi. “Hermes is playing a catalytic role in putting all these factors together.”

In addition to fostering demand for travel to Cyprus, Hermes Airports is also attracting new carriers and routes to the island through an incentive program that supports qualifying airlines and effectively shares the risk with them. In 2017 alone, Hermes Airports has seen UK and Russian airlines continue to grow, while Cyprus-based carriers such as Blue Air and Cobalt have added new routes. The Israeli market continues to grow by double-digit numbers, and the German market is making a big comeback.