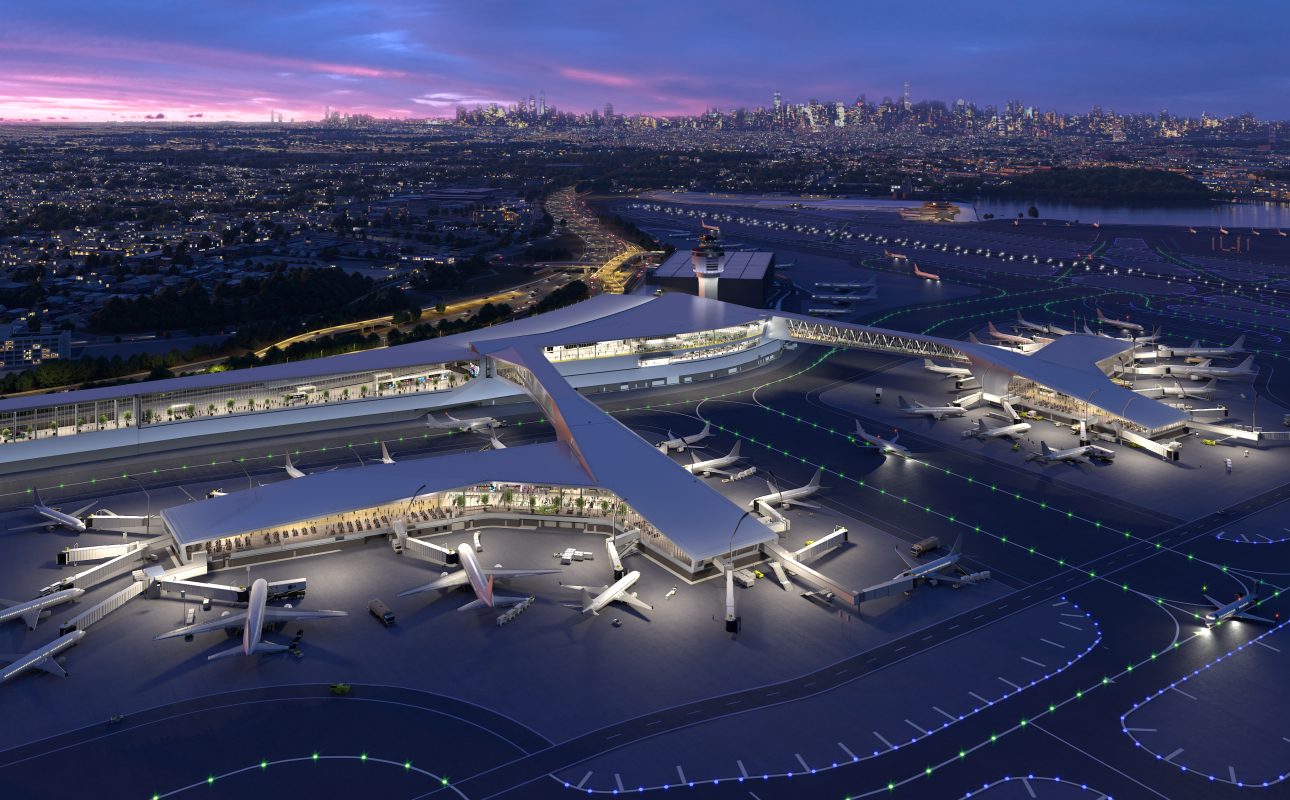 March 5, 2020; New York, NY: LaGuardia Gateway Partners (LGP), the Vantage Airport Group-led private partner leading the redevelopment of LaGuardia Airport’s Terminal B, has announced a new partnership with the leading New York-based nonprofit Public Art Fund. Revolutionizing the public’s experience with one of New York’s most important gateways, the partnership will bring four ambitious permanent public art commissions to travelers passing through the new terminal. The site-specific, large-scale installations by four of the world’s leading artists – Jeppe Hein, Sabine Hornig, Laura Owens, and Sarah Sze – will be unveiled in 2020 with the opening of the new Terminal B Arrivals and Departures Hall.

New York Governor Andrew Cuomo said “New York’s airports are the world’s entry points into the United States, and they need to reflect what this state and country are all about. As we are building a new LaGuardia to meet 21st century travel standards, we are also bringing in the work of renowned artists who capture the unique elements of Queens and New York, giving travelers a true Empire State experience the moment they arrive.”

Stewart Steeves, CEO of LaGuardia Gateway Partners, said “We are thrilled to partner with Public Art Fund on this innovative project to continue to transform Terminal B into a modern, top-class airport terminal for travelers. Our goal in building a new Terminal B is to not only implement state-of-the-art advancements, but to also create a space that represents the soul of New York. We are confident that through this partnership, we have selected artists and unique pieces for the new terminal that reflect this vision.”

Nicholas Baume, Director & Chief Curator of Public Art Fund, said “New Yorkers will soon have a major terminal at LaGuardia Airport that reflects the energy, vitality, and innovation of New York City. Great art and artists are fundamental to New York’s DNA, and we are excited to collaborate with several of the world’s most visionary artists, LaGuardia Gateway Partners and the Port Authority to create a unique new terminal that brilliantly expresses the creative spirit of New York.”

Rick Cotton, Executive Director at the Port Authority of New York and New Jersey, said, “Building a whole new airport at LaGuardia doesn’t just mean bricks and mortar, though we’re certainly doing that. It also means transforming the experience for travelers with striking artwork that conveys a sense of place – a sense of Queens and of the Empire State. We are delighted that the work of these four prominent artists will serve as focal points inside the new Terminal B Arrivals and Departures Hall. This new partnership will help beautify, engage and inspire travelers coming through LaGuardia’s Terminal B.”

George Casey, Chairman of the Board of LaGuardia Gateway Partners and Chair and CEO of Vantage Airport Group, said “The addition of contemporary art in the new terminal is key to our mission of building a sense of place at the new LaGuardia, one that is in tune with New York City’s great tradition as one of the modern art capitals of the world. We couldn’t be happier to work with some of the world’s most thrilling artists and Public Art Fund to inspire travelers as they visit Terminal B. Incorporating world-class art into our terminals is a hallmark of Vantage’s mission to create a local sense of place at all of our airports.”

Working closely with the leadership of LaGuardia Gateway Partners, Public Art Fund invited a select group of artists to develop proposals for original and iconic permanent commissions, expressing the vital essence of New York City and conceived specifically for the new LaGuardia Terminal B. After a thorough evaluation of all proposals, four of these artists were awarded permanent commissions for the Terminal B Arrivals and Departures Hall.

All permanent installations will be complete for the opening of the Terminal B Arrivals and Departures Hall in 2020. More information about the commissioned artists follows below:

Jeppe Hein: A resident of Berlin, Jeppe Hein creates interactive artworks that lie at the intersection of art, architecture, and technical inventions. Unique in their formal simplicity and frequent use of humor, his works recall traditions of Minimalist sculpture and Conceptual art of the 1970s, and often feature surprising and captivating elements that focus the spectator’s experience on the surrounding space. Hein’s notable previous exhibitions include Please Touch The Art exhibited at Brooklyn Bridge Park in 2015, as well as permanent installations in numerous locations throughout Europe.

Sabine Hornig: Berlin based artist Sabine Hornig is known for her sculptures, spatial interventions and transparent photographs that recontextualize familiar places through overlapping perspectives and inversions of scale and dimension. These concepts allow for new interpretations of conventional histories, memory, and the lived environment. Her large-scale architectural artworks, applied directly onto the existing glass facades of buildings, enable the public to simultaneously experience various visions and perspectives at the same time on the transparent medium. Throughout the past two decades, Hornig has realized installations worldwide such as Shadows, Sydney International Towers, Barangaroo, (2019), Double Transparency at Museum Boijmans van Beuningen, Rotterdam (2013/14), Durchs Fenster at Pinakothek der Moderne, Munich (2011/12) and Projects 78 at Museum of Modern Art, New York (2003).

Laura Owens: ​Los Angeles based artist Laura Owens has achieved international recognition for her dynamic and experimental paintings. Incorporating diverse references and techniques, her art challenges the nature of painting in bold and often witty ways, while demonstrating an intimate awareness of form, color, and line. Owens’ work has been featured in museums internationally, including the Art Institute of Chicago, the Guggenheim Museum, Museum of Modern Art in New York, Tate Modern, Centre Georges Pompidou, the Whitney Museum of American Art, and other prominent institutions across the globe.

Sarah Sze: A resident of New York City and professor of visual arts at Columbia University, Sarah Sze’s immersive, large-scale works navigate the proliferation of images, objects, and information that surround us daily by employing complex constellations of myriad materials. A recipient of the MacArthur Fellowship in 2003, Sze has exhibited extensively in museums worldwide and represented the United States at the Venice Biennale in 2013. Sze has been engaged in public commissions throughout her career, most recently “Blueprint for a Landscape,” 2017, which transforms the 96th Street Station of the new Second Avenue Subway Line.

Complementing the four permanent commissions, the partnership includes additional temporary artwork installed throughout the facility, providing more artists the opportunity to engage with the new terminal and its visitors. The first of this series was installed in July 2019 in the new eastern concourse, the initial portion of the new Terminal B to debut, and currently features artworks by Chris Bogia and Olaf Breuning.

Chris Bogia: A resident of Queens for more than 15 years, Chris Bogia is a recent alum of the Queens Museum Studio Program (2018) and an instructor of sculpture at New York University. Bogia received his MFA from Yale University, New Haven, CT and his BA from New York University, NY.  He was a recent recipient of the Jackson Pollock – Lee Krasner Foundation Grant, a Queens Council for the Arts, New Works Grant, as well as a Rema Hort Mann Foundation Artist Community Engagement Grant. Bogia is also the co-founder and director of Fire Island Artist Residency, the world’s first LGBTQ artist residency. Bogia’s work for Terminal B, entitled Windowsill Watcher (2018), is an abstract sculpture that combines methods drawn from the history of decorative arts, folk craft movements and interior design.

Olaf Breuning: New York based, Swiss artist Olaf Breuning has been the subject of solo exhibitions at the Swiss Institute in New York, the Migros Museum in Zurich, the Australian Center of Photography in Sydney, and the Centre d’Art Contemporain in La Chapelle du Genêteil France, among others. Breuning’s works on view in Terminal B, entitled Clouds (2014), and Thumbs Up (2015), evoke improvised signage, theatrical flats and children’s sketches inspired by one of the artist’s own photographs.

This new partnership with LaGuardia Gateway Partners and Public Art Fund is another major step in the overall LaGuardia Terminal B redevelopment. In July 2015, Governor Andrew Cuomo unveiled the vision for an $8B comprehensive redevelopment of LaGuardia Airport. The 1.3-million square foot renovation of Terminal B, with a construction value of $4B, is one of the largest public-private partnerships in American history and is the largest in U.S. aviation history.

LaGuardia Gateway Partners was selected by the Port Authority of New York and New Jersey to deliver an extensive capital redevelopment project at LaGuardia Airport’s Terminal B that will provide world-class terminal facilities and operations for passengers and airlines.

LaGuardia Gateway Partners is composed of Vantage Airport Group, Skanska, Meridiam, and JLC Infrastructure for development and equity investment. Vantage Airport Group leads the redevelopment program and management of Terminal B, with Skanska Walsh as the design build joint venture and HOK and WSP for design. LaGuardia Gateway Partners’ members have worked on more than 350 aviation and transportation projects globally and domestically, including international airports in New York (John F. Kennedy), Chicago, Doha, Delhi, Los Angeles, Santiago, and Nassau. For more information, visit www.laguardiaB.com or follow on Twitter at @terminalBLGA.

About the Public Art Fund

Public Art Fund has presented dynamic exhibitions by the world’s most compelling and significant artists in New York City and beyond for more than 40 years. These projects set the standard for excellence in the field, giving urban space new meaning, while engaging diverse audiences and making culture accessible to all.

In addition to this core program, Public Art Fund also offers consulting services that bring strategic planning, curatorial, project management and communications expertise to the world’s leading cultural institutions, corporations, and civic organizations through Public Art Fund: Creative Partnerships. Amplifying the impact of partners’ own initiatives, Public Art Fund commissions permanent installations and temporary exhibitions in line with the unique vision of its partners and the specific parameters of each site, resulting in new artworks that activate public spaces and create engaged constituencies through the power of public art. For more information, visit PublicArtFund.org.

Passionate about People, Place and Performance, Vantage Airport Group is a leading investor, developer and manager of airports around the world. Since 1994, Vantage has been making airports more efficient, profitable, sustainable and connected to the communities they serve. Vantage has lent its expertise to 31 airports in its 26-year history, taking 20 from public to private management. Its current network is composed of ten airports, including LaGuardia Terminal B in New York and Midway International Airport in Chicago. Vantage is also JetBlue Airways’ preferred development partner for the international terminal redevelopment project at New York’s John F. Kennedy International. Together, Vantage airports served 58 million passengers in 2019, travelling on 150 different airlines to 375 global destinations. Vantage is headquartered in Vancouver, with a growing North American profile that includes a presence in New York, Chicago and Denver. For more information on Vantage’s industry-leading approach, network airports and career opportunities, visit vantageairportgroup.com.