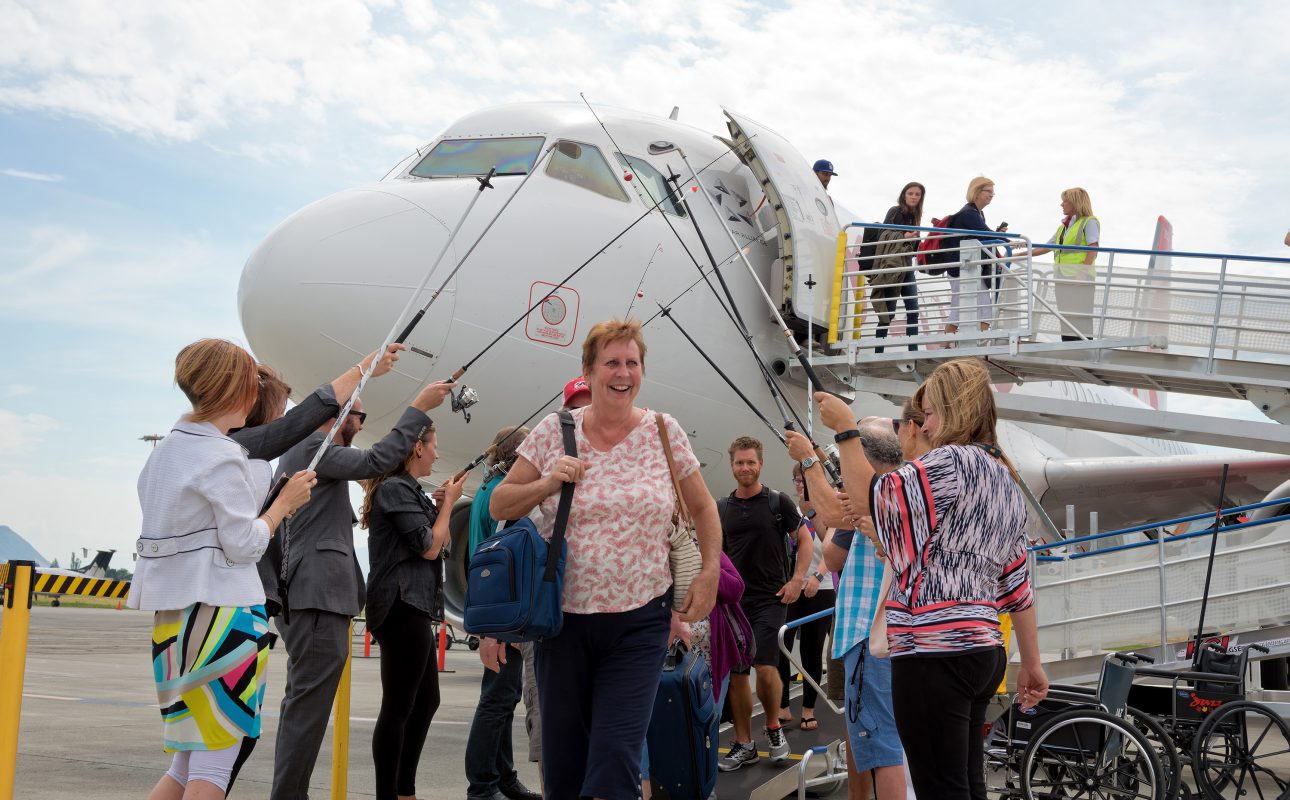 Welcomed by a traditional water salute from Kamloops Airport’s aircraft fire response vehicle, the inbound aircraft touched down at approximately 11:25 a.m. Passengers disembarking from the first flight were met with great fanfare, including a welcome arch composed of golf clubs, fishing rods and ski poles emblematic of the broad range of outdoor activities awaiting visitors to the Kamloops region. Inaugural festivities continued with a celebration for passengers travelling on the first outbound flight to Toronto, which took off at approximately 12:10 p.m.

“Today’s inaugural marks a tremendous milestone in the growth of our airport and region,” said Heather McCarley, Managing Director of Kamloops Airport. “We are so delighted that Air Canada has chosen to invest in this non-stop service, which offers travellers from across Canada opportunities to explore our beautiful community, which in turn boosts our economy through tourism and job creation.”

Air Canada Rouge’s Kamloops services will operate using Airbus A319 aircraft with capacity for 136 passengers. From June 21 through October 9, flights will operate every Tuesday, Thursday and Saturday, timed to connect with Air Canada’s domestic and international network out of Toronto.

“We are very pleased to launch the only non-stop services from Kamloops to Toronto just in time for the busy summer travel period. The convenience of this new service makes it easier than ever for customers from other parts of our network to travel to beautiful British Columbia’s Thompson Okanagan area. Customers from Kamloops now have the convenience of non-stop flights to Toronto, where unparalleled connecting options are also available throughout our far-reaching North American and global network,” said Benjamin Smith, President, Airlines and Chief Operating Officer at Air Canada.

The new service is a result of concentrated efforts to grow connectivity to the region, in partnership with the City of Kamloops, Tourism Kamloops and Tourism Sun Peaks. Local residents, tourism partners and regional businesses stand to benefit from access to new markets for business or leisure. According to its most recent economic impact study, Kamloops Airport generates supports more than 850 jobs in the community, generating $72.2 million in total economic output annually.

“As Mayor of Kamloops and President of the Kamloops Airport Authority, I am delighted that Air Canada is offering this enhanced level of service to our community and our region,” said Ken Christian. “I encourage air travellers to make use of this east-west direct connection so that we can prove to the carrier that Kamloops and area is a solid investment.”

For more information regarding Air Canada Rouge’s summer services or to make a reservation, visit www.AirCanada.com.