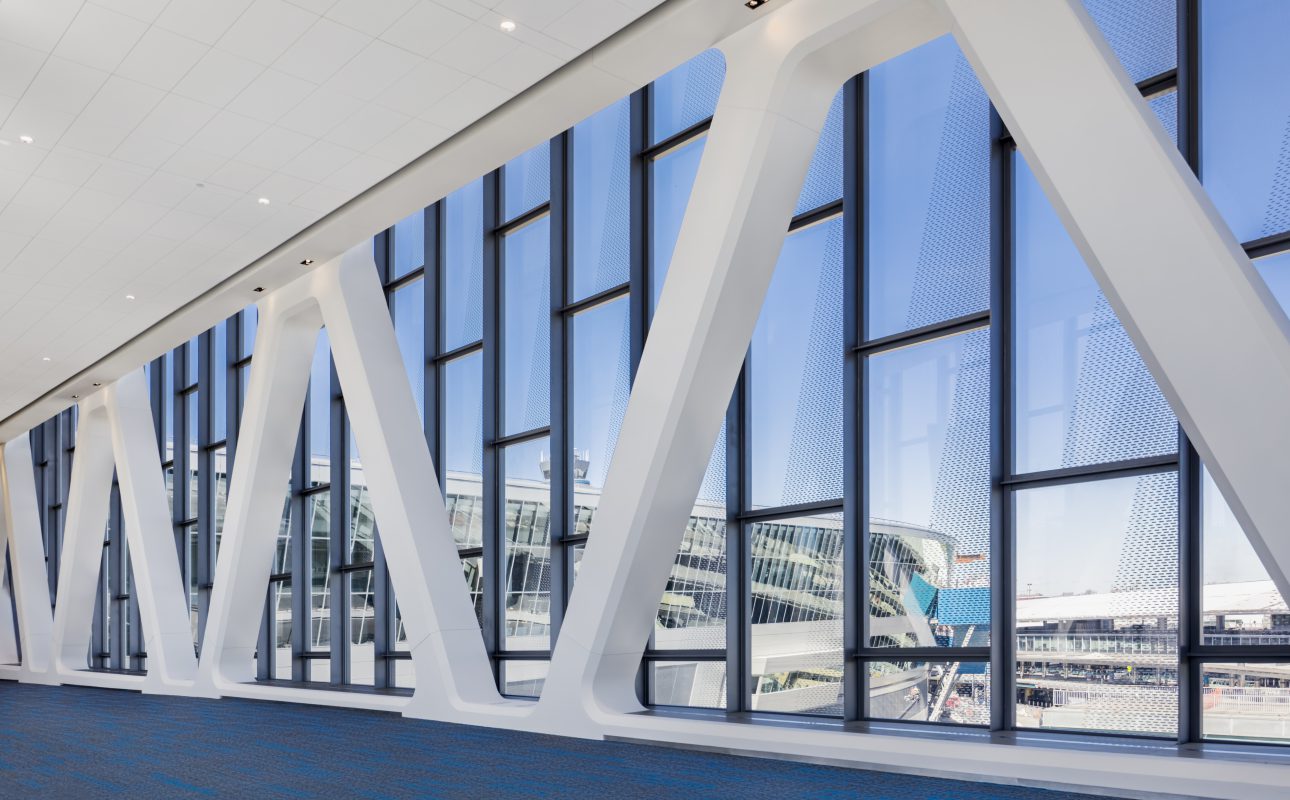 New York, NY; January 27, 2022: Vantage Airport Group, a global airport investor, developer, and manager, today marked a significant milestone in its $5.1 billion transformation of LaGuardia’s Terminal B, with the opening of the terminal’s second elevated pedestrian bridge, the final piece of the new terminal’s interior to debut and the project’s last major construction milestone.

Connecting Terminal B’s western concourse to the Arrivals & Departures Hall, which opened in June 2020, the western skybridge spans 482 feet and offers passengers spectacular views of the Manhattan skyline. With this milestone, LaGuardia becomes the first airport in the world to feature dual skybridges above active taxiways.

Design of the dual skybridges, a concept envisioned by Vantage and brought to life by design and architecture partner HOK, was a critical element of the terminal’s redevelopment. Not only did the concept allow the original terminal to remain operational during construction of the bridges overtop, but when the taxiway underneath the western skybridge opens later this year, LaGuardia’s busy airfield will grow by a much needed two extra miles of taxiway space.

The new 1.3 million-square-foot Terminal B is part of the comprehensive redevelopment of LaGuardia Airport, led by the Port Authority of New York and New Jersey, under the leadership of Governor Kathy Hochul. Representing the largest public-private partnership in U.S. aviation history, the monumental LaGuardia Terminal B project is now more than 90% complete.

“Opening the last public-facing portion of the new Terminal B is a milestone the Vantage team is particularly proud of, as the dual skybridge design illustrates the creative planning, design, and phasing that allowed Terminal B to remain fully operational throughout the entire redevelopment project, “said George Casey, Chair & CEO, Vantage Airport Group and former Chair of LaGuardia Gateway Partners. “As an equity investor, lead developer responsible for construction oversight, and manager of the new Terminal B, it’s been an honor to partner with the Port Authority of New York and New Jersey and our LGP and airline partners to bring to life one of the most innovative and complex airport redevelopment projects in the world.”

Vantage has been leading the redevelopment since the Port Authority first initiated its plans to redevelop Terminal B in 2011. Teaming with Skanska, Meridiam, and JLC Infrastructure for development and equity investment; Skanska Walsh as the design build joint venture; and HOK and WSP for design, Vantage led the team through the critical procurement, design development, airline engagement, and financing stages of the project, reaching financial close and lease commencement in 2016 From initial ground-breaking through every construction milestone to present, Vantage has also delivered safe, secure terminal operations in both the old and new terminals, new commercial programming, and an exceptional passenger experience, and will continue to do so as terminal manager through 2050.

The 2021 recipient of the prestigious UNESCO 2021 Prix Versailles, the global architecture and design award for best new airport in the world, the new Terminal B includes 35 gates across two satellite concourses, and a four-story, 850,000 square foot Arrivals & Departures Hall housing check-in, baggage claim, passenger security screening, and a vibrant commercial district featuring New York favorites and global brands. A collection of public art installations commissioned for the terminal through a partnership with the Public Art Fund, architectural and design finishes inspired by New York’s iconic neighborhoods, and guest amenities including spacious restrooms, floor-to-ceiling windows, pocket parks, and children’s play areas round out the world-class guest experience at the new Terminal B.

Additionally, Vantage and its partners’ commitment to sustainability, community engagement, and supplier diversity is reflected in Terminal B’s recent designation as the first airport project to ever earn LEED v4 Gold by the U.S. Green Buildings Council; the creation of an estimated $5B in direct economic activity over the course of the project; and the awarding of nearly $1B in commitments to more than 300 minority and women owned businesses during terminal design and construction.

“We are very proud to celebrate the substantial completion of LaGuardia Terminal B alongside our partners, “said Stewart Steeves, Vantage’s Chief Operating Officer, and former CEO, LaGuardia Gateway Partners. “Many people, from the LGP team to airport staff from other Vantage network locations to concession operators and our airline colleagues at Air Canada, American, Southwest, JetBlue and United, had a hand in creating the new Terminal B, a world-class facility befitting New York, its residents, and visitors.”

With 27 years of experience developing, managing and operating more than 30 airports around the world, Vantage is now lending its expertise to another world-class airport terminal development in the New York market. Vantage is the lead partner in JFK Millennium Partners (JMP), the consortium selected by the Port Authority to develop a new Terminal 6 at John F. Kennedy International Airport (JFK), along with airline sponsor, JetBlue. This $3.9 billion dollar, 1.2 million square foot development will connect to JetBlue’s existing Terminal 5 and include capacity for 10 gates, airy check-in halls and arrival spaces as well as more than 100,00 square feet of commercial dining and retail amenities, lounges, and recreational spaces.

Much like the experience at LaGuardia Terminal B, the new JFK Terminal 6 will incorporate the latest advances in both sustainability and security, infused with Vantage’s renowned customer experience, operational excellence, and a uniquely New York sense of place. The redevelopment will also include critical infrastructure improvements to the airport’s roadways to optimize traffic flow, enhanced aircraft circulation, and capacity for additional airline operations, to improve connectivity and maximize use of space. Engagement with local, minority, and women owned businesses at every level and stage of the project will create a terminal that is anchored in and reflects the community it serves. Construction of the new terminal is scheduled to begin later in 2022 and the first new gates are scheduled to open in 2025.