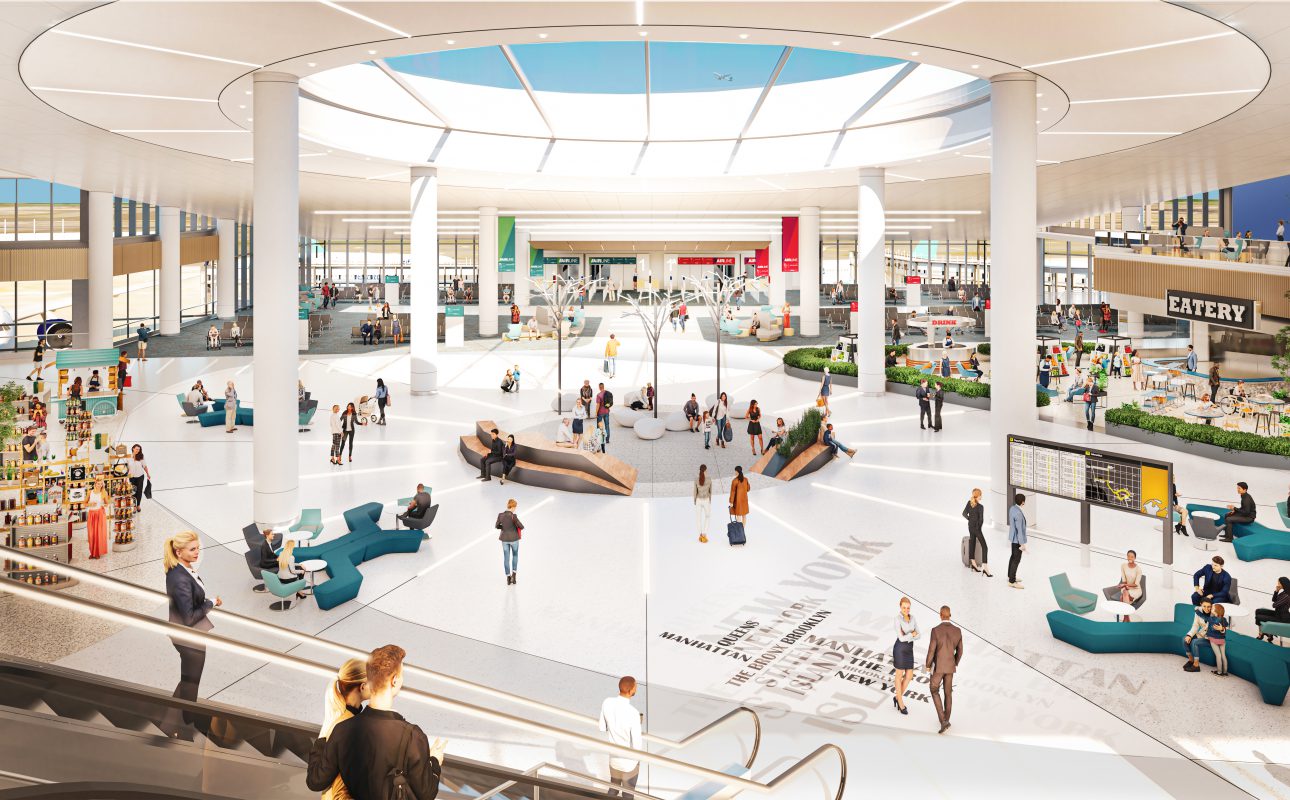 On August 3, New York State and the Port Authority of New York and New Jersey issued a news release that gives a green light to the plan to build a state-of-the-art new international terminal that will anchor the north side of John F. Kennedy International Airport.

Officially approved by the PA Board of Directors on August 5, the Port Authority has entered into a lease agreement with Vantage-led JFK Millennium Partners, the private consortium that will finance, develop, and operate the new $3.9 billion, 1.2 million square foot new terminal. The full $3.9 billion expense of building the terminal will be privately financed by JFK Millennium Partners. It will be built on the sites of the former Terminal 6, which was demolished in 2011, and the aging Terminal 7, which will be torn down after British Airways relocates to Terminal 8.

For this project, Vantage has partnered with American Triple I (ATI), a 100% minority and woman owned investor and developer, and RXR Realty, a leading New York commercial real estate development firm, with AECOM Hunt as the design-build team.

Together with the Port Authority and JetBlue, the new terminal’s airline sponsor, Vantage will have the exciting opportunity to bring yet another world-class airport terminal to life in the New York metro area, through intuitive, sustainable terminal design, best-in-class operations, and more than 100,000 square feet of exceptional, New York inspired customer amenities – much like the features travelers are now enjoying at the Vantage-developed LaGuardia Terminal B, which opened its spectacular Arrivals & Departures Hall just last year.

George Casey, Chair & CEO, Vantage Airport Group, said:
“As lead member of JFK Millennium Partners, Vantage Airport Group is honored to partner with the Port Authority, JetBlue, and all of our JMP partners, to bring another world-class airport terminal to life in the New York metro area for the benefit of travelers and the local community, New York is such a proud and vibrant city, and we look forward to bringing that energy to this international terminal redevelopment project, through intuitive terminal design, best-in-class operations, and exceptional passenger amenities.”

The T6 redevelopment will include critical infrastructure improvements to the airport’s roadways, optimizing traffic flow and transportation access at the airport. It will also deliver enhanced circulation for departing and arriving aircraft, reducing airside congestion and delays.  In addition, the expanded footprint offers capacity for additional airline operations, to improve connectivity and maximize use of the space.

Local community involvement is a significant component of this project, and similar to Vantage’s achievements at Chicago Midway and LaGuardia Terminal B, the goal is meeting or exceeding New York State’s goal of 30% utilization of Minority and Women Owned Business Enterprises (MWBEs). The redevelopment of JFK comes at a critical time for economic recovery from the pandemic. Vantage and its partners are creating and executing a robust engagement plan, which will maximize opportunities for local and diverse community involvement in every aspect of the project, from investment and construction to concessions and operations contracts.

The new T6 will also feature a fully sustainable design, in keeping with our approach at LaGuardia Terminal B, which recently earned a Leadership in Energy and Environmental Design (LEED) Gold certification from the U.S. Green Building Council, the first airport project in the world to achieve the stringent Gold certification. T6 will incorporate a mix of sustainable strategies which meet specific benchmarks provided for energy efficiency, water conservation, site selection, and waste reduction. For example, renewable energy technologies will include a solar photovoltaic system, aircraft de-icing and fluid recovery, and stormwater capture and re-use, while high efficiency lighting, baggage system motors, and automated building controls will help conserve energy in the completed terminal.

The project was initially supposed to break ground in 2020.  The extraordinary level of private investment had been threatened by the impact of the COVID-19 on air travel and future projections for the industry. The restructured deal marks a major step forward in the ambitious plan to transform JFK into a unified 21st century global gateway and is a testament to the partners’ commitment to the future of the airport and New York.

The new terminal will connect to Terminal 5 and be equipped with capacity for ten new gates, as well as bright and airy check-in halls and arrival spaces designed to enhance the customer experience. Customers will enjoy more than 100,000 square feet of commercial dining and retail amenities, lounges, and recreational spaces. The new terminal will also incorporate the latest advances in both sustainability and security, infused with the partners’ renowned customer experience, operational excellence, and a uniquely New York sense of place.  Construction of the new terminal is scheduled to begin in mid-2022 and the first new gates are scheduled to open in 2025.

The new Terminal 6 will connect to and be seamlessly integrated with the existing T5, including the eventual consolidation of international arrivals facilities, and by consolidating a distinct taxi plaza as well as designate for-hire vehicle pick-up areas with T5.  These changes will not only create a world-class experience for the new Terminal 6 passengers but will also substantially reduce traffic congestion on the T5 road frontage.

JFK Airport is one of the region’s most powerful economic engines, supporting roughly 300,000 jobs that pay $16.2 billion in wages annually while generating $45.7 billion in yearly sales. Prior to the onset of the pandemic, the airport set a record with 62.6 million passengers in 2019.