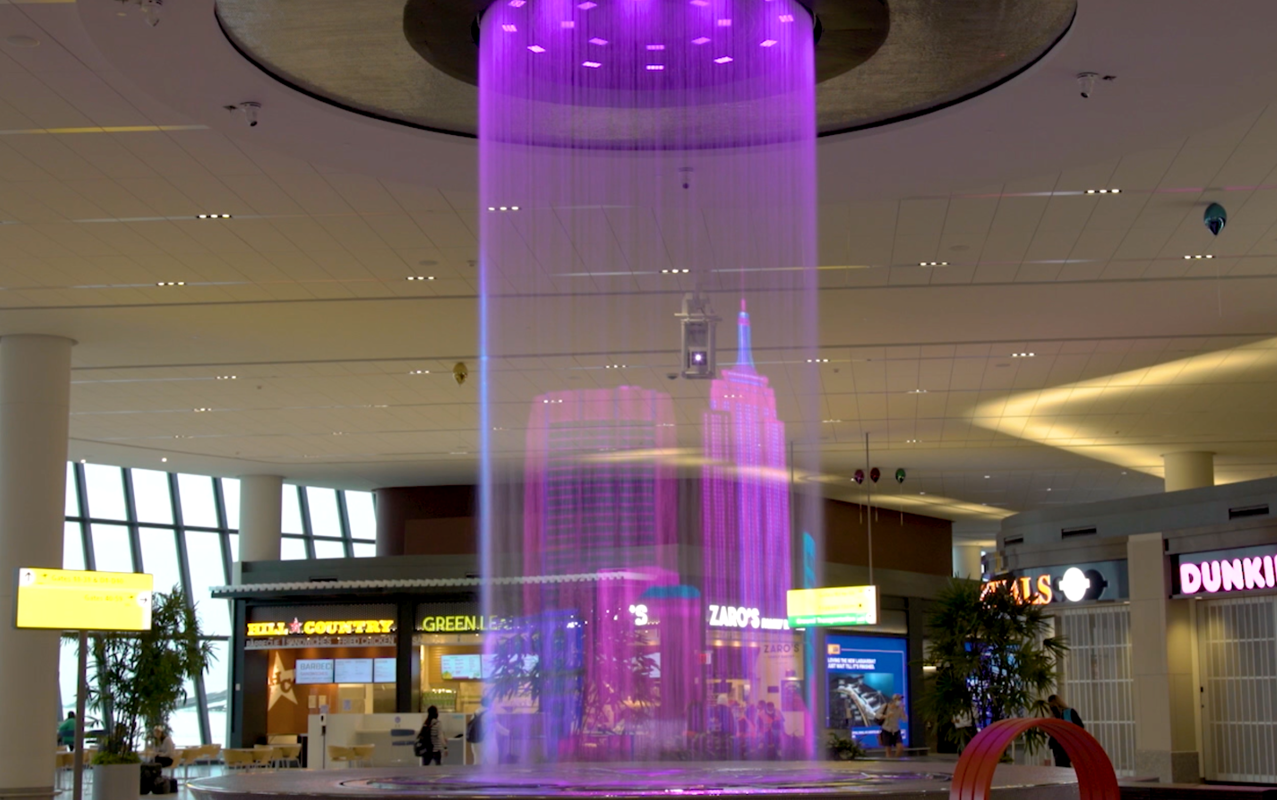 New York, N.Y. (November 13, 2020) – Vantage Airport Group-led LaGuardia Gateway Partners (LGP) announced today that a state-of-the-art water feature is now operational in the brand new Arrivals and Departures Hall at LaGuardia Airport’s Terminal B. LGP is the private entity managing and redeveloping the new terminal. The Arrivals and Departures Hall opened earlier this year, marking yet another milestone in the overall redevelopment project.

The water feature, which is the centerpiece of Level 4 of the Hall, is a system that was developed by French company Aquatique Show. This is the only installation located in the Americas, and the only one located within an airport globally. The system creates a captivating show for passengers as they are moving through the terminal, providing them with entertainment and tranquility as they prepare for their travels.

This incredible system circulates 4,000 gallons of water through nozzles are programmed to release in a manner that allows the water to form different shapes and patterns. The piece is suspended 25-feet off the ground and includes two large rings – one inside of the other – with water dropping from nozzles in both rings to create a water curtain. The water drops into a pool and is then recirculated through the system, and there is also the opportunity to control the speed and shape at which the water flows through the system.

LGP has added lighting, projection, and audio to the water feature, enabling the system to allow for a series of shows. Using three laser projectors, two media servers and a talented team of content designers, virtual artists, and sound engineers, LGP has created shows that celebrate New York City, as well as themed shows for holidays and events.

“This innovative feature is another way we are engaging with passengers here at the new Terminal B,” said Stewart Steeves, Vantage Airport Group Senior Executive and CEO of LaGuardia Gateway Partners. “It reflects the vibrancy and uniqueness of New York City and offers passengers an unexpected and entertaining experience as they travel through the terminal.”

The Arrivals and Departures Hall for the new Terminal B is where passengers check-in, pass through security, experience best in class shops, restaurants and services, and pick up their checked baggage. The building connects directly to the new eastern concourse gates via a pedestrian bridge built over top of the original terminal – a truly innovative design incorporated in the new terminal to ensure that the original facility remained operational throughout construction. A second bridge is currently under construction leading to the western concourse. The Terminal B project is now over 80% complete.

In July 2015, Governor Andrew M. Cuomo unveiled the vision for a comprehensive redevelopment of LaGuardia Airport, which included the new 1.3 million square foot Terminal B. With a construction value of $4B, the Terminal B project is one of the largest public-private partnerships in American history and the largest in US aviation. The Terminal B redevelopment includes a new 35-gate terminal, a parking garage, and a Central Hall, which will unify the airport by connecting to Terminal C, which is also being redeveloped.