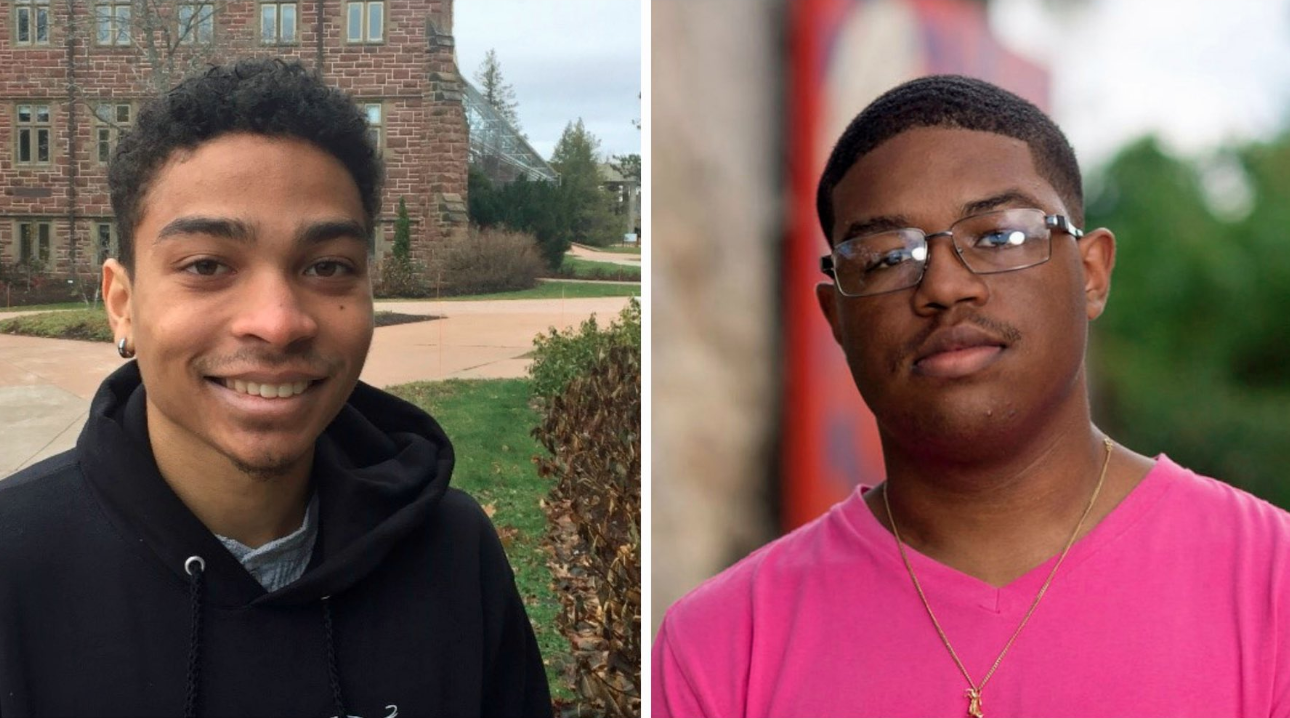 The scholarship is offered to students in the Bachelor of Science (Aviation) program at Mount Allison University. This unique undergraduate program pairs a degree with pilot training offered by the university in partnership with Moncton Flight College.

Josef Gonzalez is a first year Bachelor of Science (Aviation) student from Trinidad and Tobago. (Pictured at left, above.)

The youngest in his family, Josef lives with his parents and two siblings. Studying aviation has been his dream ever since he was a child watching airplanes land at his local airport.

“I enjoy aviation just for the simple idea of being in the air, being so high, flying through the clouds and flying over clouds. And who does not get a thrill from taking off?” he says. “I feel truly privileged to be awarded the Rob Robichaud Vantage Airport Group Scholarship in Aviation.”

“Getting this opportunity from Mount Allison University to study here, far away from home, has not been simple, but the staff and students – and even the community – have made it much easier for me,” Josef says.

Ernest Munnings is a first-year Bachelor of Science (Aviation) student from Nassau, Bahamas, and is eager to become a pilot. (Pictured at right, above.)

From a very young age, Ernest became interested in aviation. Every time he heard a plane in the sky, he would stop and stare until it went by, no matter what he was doing. He would automatically be fixated on the plane wherever it was.

“I am completely grateful for the generosity and kindness of the donors of the Rob Robichaud Vantage Airport Group Scholarship in Aviation,” Ernest says. “My family and I are grateful for this assistance which will be put toward my education and my pursuit of advancement in the aviation industry.”

As Ernest hails from a community that is home to another Vantage airport, Lynden Pindling International Airport in Nassau, The Bahamas, Vantage is proud to also help strengthen network connections through this scholarship.

The Rob Robichaud Vantage Airport Group Scholarship in Aviation was first awarded for the 2018-2019 academic year and is available to full-time students in, or entering, the Bachelor of Science (Aviation) degree program. The scholarship is awarded to two students per year at a value of $5,000 each.

The scholarship is named in honour of the late Edgar (Rob) Robichaud, past CEO of the Greater Moncton Roméo LeBlanc International Airport, retired RCAF lieutenant-colonel, well-known community leader and past board member for several Moncton-area organizations.

Established in 2008, Mount Allison’s Aviation program is offered in partnership with the Moncton Flight College. The Bachelor of Science degree program is one of only a few in Canada that allows students to earn an undergraduate degree that incorporates flight and ground school training. Students focus on subjects relevant to aviation such as geography, mathematics and physics at Mount Allison; complete ground school training at the Moncton Flight College; and complete more than 200 hours of flight training. Graduates have a high level of employment immediately following their degree.Interested applicants can learn more about the program and how to apply at mta.ca/apply.

YQM is a progressive airport and the leading airport in the central Maritimes. 24/7/365 – everyone associated with the airport strives to provide superior air service to passengers travelling all over the world and to the global cargo industry -safe, convenient, efficient, bilingual and businesslike. YQM also strives to maximize its contribution to local and regional economic and community development – it currently drives over $665 million of economic activity annually, making it one of the top private-sector economic contributors to New Brunswick’s economy.

Vantage is a leading investor, developer and manager of airports around the world. Since 1994, Vantage has been making airports more efficient, profitable, sustainable and connected to the communities they serve. Vantage has lent its expertise to 31 airports in its 26-year history, taking 20 from public to private management. Its current network is composed of ten airports, including LaGuardia Terminal B in New York and Midway International Airport in Chicago. Vantage is also JetBlue Airways’ preferred development partner for the international terminal redevelopment project at New York’s John F. Kennedy International. Together, Vantage airports served 58 million passengers in 2019, travelling on 150 different airlines to 375 global destinations.