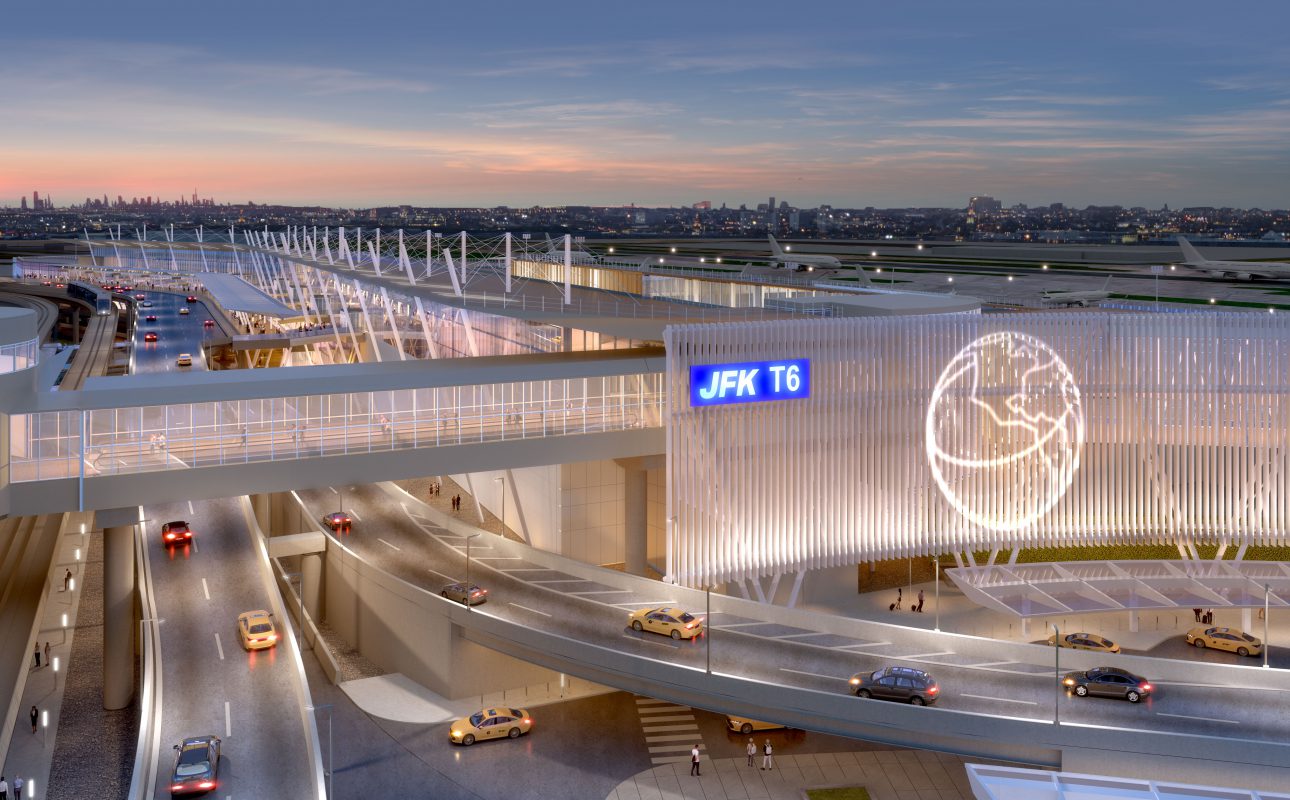 Selected by the Port Authority of New York and New Jersey for this development, JMP is a private company composed of Vantage Airport Group, an industry-leading investor, developer, and manager of award-winning global airport projects, including LaGuardia Terminal B; American Triple I (ATI), a certified minority-owned investor, owner, developer, and manager of infrastructure assets; leading New York real estate operating company RXR; and JetBlue, New York’s Hometown Airline®. JMP will develop the new international terminal in two phases, with the first gates opening in 2026 and project completion expected in 2028.

Port Authority Executive Director Rick Cotton said, “The financial close on a new Terminal 6 allows us to move forward with the final piece of our plan to transform JFK International Airport into one of the world’s great global gateways. The $4.2 billion private investment in Terminal 6 by JFK Millennium Partners is a vote of confidence in our vision for a new JFK and in the future of our region. We want to thank New York Governor Kathy Hochul, U.S. Senate Majority Leader Chuck Schumer, Deputy Secretary Polly Trottenberg of the U.S. Department of Transportation, U.S. Congressman Gregory Meeks, Queens Borough President Donovan Richards, and the leadership and staff of the Federal Aviation Administration in Washington, in Region 2, and at JFK International Airport. Without their support, getting this important project to financial close would not have been possible.”

George Casey, Board Chair, JFK Millennium Partners and Chair & CEO, Vantage Airport Group, said, “We’re honored to join our partners at the Port Authority of New York and New Jersey in today’s announcement. We’ve assembled a first-class team, led by Vantage and backed by Corsair, our shareholder and the project’s principal financial sponsor, to deliver a new international Terminal 6 that will transform the guest experience and contribute to the overarching transformation of JFK International Airport, maximize opportunities for community involvement and employment, as well as demonstrate the power of strong partnerships to deliver extraordinary airport infrastructure for our communities.”

JFK Millennium Partners CEO, Helena Williams, said, “We are delighted to mark today’s financial close milestone of the $4.2 billion dollar project to create a new, world-class Terminal 6 anchoring the north side of JFK. Working with our partners at the Port Authority of New York and New Jersey, Vantage, ATI, RXR, and JetBlue, we are ready to bring an unprecedented level of economic activity to southeast Queens with construction jobs and opportunities for minority- and women-owned businesses as we build a state-of-the-art terminal at one of the nation’s most important international gateway airports.”

David J. Cibrian, CEO, ATI, said, “ATI is honored to join with our consortium partners of Vantage, RXR, and JetBlue on today’s announcement, and we are proud to have played our part as an infrastructure fund manager and equity owner in the development and financing of the new international Terminal 6.  This project brings a $4.2 billion public private partnership to the redevelopment of JFK International Airport as well as to the broader New York region. ATI is deeply appreciative of the Port Authority of New York and New Jersey for their visionary leadership in ensuring there are opportunities for MWBE firms at all levels of this project. We likewise thank the local communities surrounding JFK for their partnership and continued support as JMP continues to bring economic development and opportunity to Southeast Queens.”

Scott Rechler, Chairman & CEO, RXR, said, “We can no longer use the playbooks of the past to address the region’s most critical infrastructure challenges. There is no better way to leverage public resources and unlock private sector investment and innovation than through public-private partnerships. After years of planning and navigating a global pandemic, we’re proud to advance the Port Authority’s latest public-private partnership with a new world-class air terminal at JFK International Airport.”

Robin Hayes, Chief Executive Officer, JetBlue, said, “New York is in JetBlue’s DNA and inspires everything we do. Today’s financial close allows us to help introduce another world-class terminal in our home of the Big Apple. We are thrilled to work alongside the Port Authority of New York and New Jersey and with JFK Millennium Partners to modernize JFK and bring our unique brand and culture to even more New Yorkers in a brand-new terminal. Thanks to our Northeast Alliance with American Airlines, JetBlue’s presence in New York has never been greater and the new Terminal 6 project will only accelerate our growth in the years to come.”

Approved in August 2021 by the Port Authority Board of Commissioners, the new Terminal 6 development will feature a 1.2 million square foot terminal, 10 new gates – including nine wide-body gates – and bright and airy check-in halls and arrival spaces designed to enhance the customer experience. Customers will enjoy more than 100,000 square feet of dining and shopping, airline lounges, and recreational spaces. Custom art works and the latest advances in sustainability and security will also figure prominently in the new terminal complex.

The redevelopment will include enhanced airside aircraft circulation, to reduce congestion and delays, as well as critical infrastructure improvements of related roadways, to optimize airport traffic flow and maximize connectivity across the airport. The new Terminal 6 will also connect seamlessly to JetBlue’s existing JFK Terminal 5.

Lufthansa Group
Lufthansa Group, which has been operating in the New York region for more than six decades, will also make its home in the new Terminal 6, operating international flights out of several gates and creating a world-class lounge experience for guests travelling on its airlines, which include Lufthansa, SWISS, Austrian Airlines, and Brussels Airlines.

The development of Terminal 6 is expected to create more than 4,000 jobs and direct wages of $1.9 billion. JMP is committed to meeting and exceeding the Port Authority’s goal of 30 percent participation by minority-and women-owned businesses and creating opportunities to foster and grow local businesses through the development. The Terminal 6 project is part of the Port Authority’s overarching, $18 billion transformation of JFK under the leadership of Governor Hochul.

Today’s announcement follows a busy summer of milestones in the transformation of the region’s airports. In June, Governor Hochul held a ground-breaking event for the New Terminal One, the $9.5 billion terminal redevelopment project on JFK’s south side. This was followed by a ribbon-cutting event to open Delta Airlines’ new Terminal C at LaGuardia Airport, and the substantial completion of LaGuardia’s new Terminal B, one of the largest P3 projects in US transportation history, delivered on time and on budget by a consortium also led by Vantage Airport Group.

Morgan Stanley & Co. LLC served as financial advisor to JMP on the transaction.

About Vantage Airport Group
Passionate about People, Place, and Performance, Vantage Airport Group is a leading investor, developer, and manager of airports and transportation infrastructure around the world. Since 1994, Vantage has made more than 30 airports more efficient, profitable, sustainable, and connected to the communities they serve. Its current network is composed of 13 active airport and rail station operations, in locations ranging from large capital cities and tourist destinations to smaller destinations in the U.S., Canada, the Caribbean, and Europe, including the $5.1 billion redevelopment of LaGuardia’s Terminal B in New York, the $4.2 billion development of a new JFK Terminal 6, and major concessions redevelopment projects at Chicago’s Midway International Airport and Kansas City International Airport’s new terminal. Vantage is a wholly owned strategic platform of Corsair Infrastructure Partners for capital deployment in the airport sector.

About ATI
ATI is an investor, owner, developer, and manager of infrastructure assets and infrastructure-focused companies. ATI is committed to serving its investor partners and communities alike, by deploying capital into projects and businesses throughout the United States. The firm targets value-add opportunities in the transportation, digital and social infrastructure sectors. ATI is a certified minority-owned, -managed, and -controlled investment manager.

About RXR
RXR is an innovative investor, developer and place-maker committed to applying a customer and community-centered approach to building properties, services, and products that create enduring value for all stakeholders. Headquartered in New York with a national platform strategy, RXR is a 500+ person, vertically integrated operating and development company with expertise in a wide array of value creation activities, including ground up real estate, infrastructure and industrial development, uncovering value in underperforming properties, repurposing well-located iconic properties, incorporating cutting edge technologies and value-added lending. The RXR platform manages 91 commercial real estate properties and investments with an aggregate gross asset value of approximately $21.2 billion, comprising approximately 30.4 million square feet of commercial properties, a multi-family residential portfolio of approximately 8,000 units under operation or development, and control of development rights for an additional approximately 3,800 multi-family and for sale units as of September 30, 2022. Gross asset value compiled by RXR in accordance with company fair value measurement policy and is comprised of capital invested by RXR and its partners, as well as leverage.